The (incredible) power of social media

Radio 538 posted a report on their Facebook page on Thursday June 19th 2014 at 09:48 hours.  Below you can see what can be achieved by a posting:  almost 3 million views, many reactions (see all of these on their Facebook page Radio 538) plus 600,000 clicks!  In other words, 1 in 5 people who saw this report on their timeline clicked on the link provided by Radio 538 in their posting.  And all this within 10 hours of the posting…..

Initially not much happened after the posting, but this was due to a global  Facebook interruption.  After about half an hour, attention took off and the post remained active until a dip at dinner time.  After that, attention again grew to its highest peak at 19:00 hours.  Just to reiterate, without any form of sponsorship. 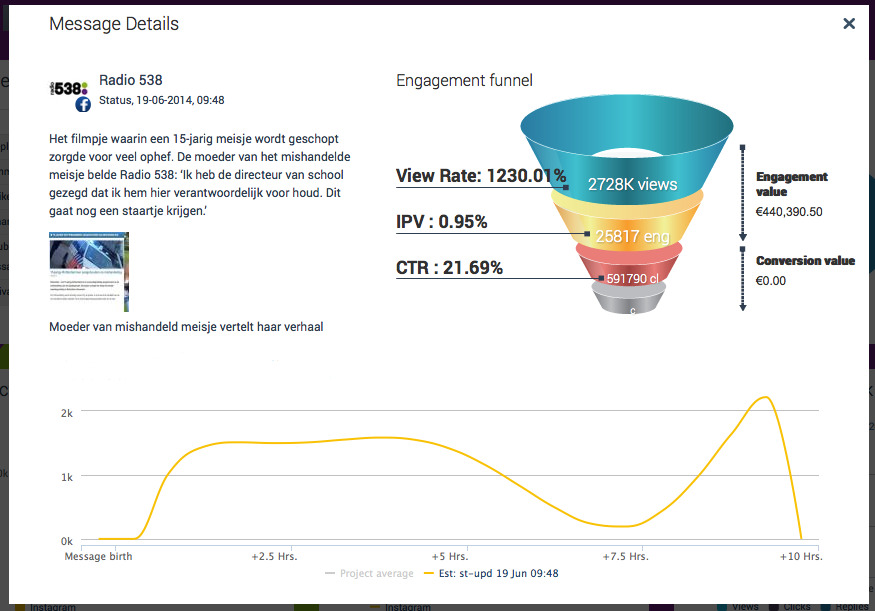 With a click through rate of nearly 22%, this report ensured a media value of easily 440,000 Euro. Media value or Engagement Value, offers an insight into what your social postings are worth and how ‘likes’, clicks and and views contribute to these values.  Media value indicates what it would have cost you if you had to achieve this level of reach and engagement through alternative channels. This way, the Radio 538 report became the most viewed post ever on our platform!

Note:  this formula has been developed together with  Omnicon and Isobar and is based on existing media options (eg a click, a banner, a view etc.)